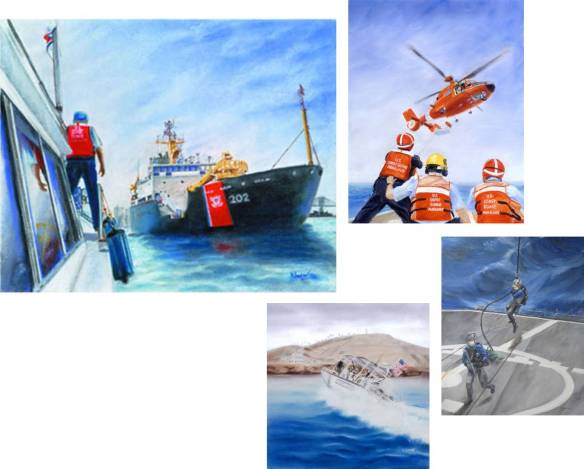 Karen Loew and the artists who participate in the Coast Guard Art Program (COGAP) and the art programs of other branches of the country’s armed forces immortalize in paintings the bravery of men and women serving in the U.S. military.

The artists are, according to Loew, “visual historians, morale boosters and fan club”. Artists work as volunteers, and they donate time and talent to create works of art depicting the varied missions of the military. “The paintings depict experiences of danger, the suspense of the unknown, the anxious moments of search and rescue, the relief of a successful mission, and the emotions of a return home,” says Loew. Each work of art is a gift from the artist to the Collection.

“Emails I have received thank us for capturing their memories and experiences, and for portraying the Coast Guard in a very positive and remarkable way. I chair the COGAP Committee at the Salmagundi Club, which is an artistic and cultural center that’s been here for over 140 years and is also the proud sponsor of COGAP. When I joined COGAP in 1999, I did not have expectations of what would become of the art I would donate to the Collection. Rather, I was just thrilled to be accepted and have my art included. Since then, I have observed that the art of the Collection does have an amazing public life, educating the public about the missions and history of our Coast Guard through displays at museums, libraries and patriotic events. Art is also displayed in government offices and at Coast Guard locations around the country.

All the branches of the United States armed services have art programs:

The United States Coast Guard Art Program was co-founded in 1981 by combat artist George Gray and John Ward of Coast Guard Community Relations. COGAP welcomes requests for public displays of artwork and inquiries from artists to join the program.

The United States Navy Art Collection has over 15,000 paintings, prints, drawings, and sculpture. It contains depictions of naval ships, personnel, and action from all eras of U.S. naval history, but due to the operation of the Combat Art Program, the eras of World War II, the Korean War, the Vietnam War, and Desert Shield/Storm are particularly well represented. The Branch manages the art collection, produces exhibits, loans artwork to museums and institutions, and provides research assistance on the art collection.

Karen Loew is Chair of the Coast Guard Art Program Committee of New York’s Salmagundi Club, and she serves on the club’s board of directors. In 2002, the Coast Guard sent her to Guantanamo Bay, Cuba (GTMO) to document activities of Coast Guard Port Security Unit 305. She is frequently a speaker at COGAP events, most notably for the opening reception of the COGAP exhibition in Vlissingen, Holland in 2009. In 2011, she was given the Coast Guard Distinguished Public Service Award, the highest recognition given to those who have made outstanding contributions in advancing the Coast Guard’s missions.

Loew’s art has been featured in the book American Women Artists in Wartime, 1776 – 2010 as well as The New York Times, and Professional Artist. Her paintings are held in private and public collections.