Isabelle Garbani, is an emerging artist who lives and works in Brooklyn,
NY 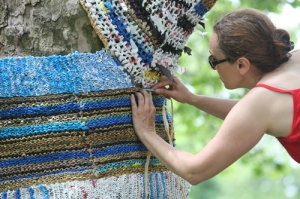 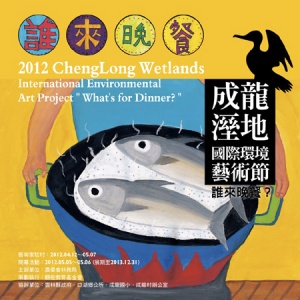 1. When did you get your first opportunity to do a public installation, and what was the objective?

My first opportunity was with a non-profit group called Figment, for
their sculpture garden on Governors Island in New York City.

Their objective is to make art more accessible to the general public,
and they work very hard to make that happen every summer.

I share a lot of their philosophy about art: it should be free and
accessible to all, and engage the public in a non-intimidating way.
My exhibit called Knit for Trees was entirely made with plastic from
recycled bags, and wrapped trees in tree “sweaters”.

Every weekend, I set up a knitting circle and invited park visitors to
knit with me or learn how to knit. The panels created during the
summer were added to the installation, which kept growing over time.

2. What permissions, specific guidelines do you need to have work in a
public space?

I generally work with larger groups (a city commission, or a non-profit
art group) so all the permits and publicity is taken care of in advance
of the work being installed.

As a one person operation, I find it more manageable to go that route
because it allows me to concentrate on the work without having to do
any paperwork.

When my career is further along, and I can see having folks working
with me, then I can start thinking about finding more specific sites
and asking for permits.

3. Are there safety or aesthetic considerations that influence this
type of work?

Safety is always an issue with public art: both for the public and for
the art!

The work must be sound and be able to withstand un-monitored pedestrian
high traffic.

There’s always some risks that the artist must take because of that,
and a certain amount of letting go, because one cannot control all
events.

I have had one installation vandalized in the past, which is
heart-breaking, but is part of having art in the public realm

4. How is it different for you as an artist to do these types of
installations?

The main reason I chose to go to public art is that I wanted to avoid
going the gallery route.

Galleries cater to a very specific clientele, which I feel is limited,
and I wanted my art to be visible to more people.

I am however getting better at it!

Isabelle Garbani has had exhibitions at Payne Gallery in PA, Figureworks Gallery in Brooklyn, the New York Academy of Art and the Benrimon Gallery in New York City. She had her first solo exhibit in 2008 at the Earlville Opera House and her second in 2011 at her gallery, BoxHeart Gallery in Pittsburgh.

Her work from the 2010 show Single Fare was shown in the New York
Times. In 2011, she completed the public installations Knit for Trees
on Governors Island in New York City, and Forces of Nature for the
Sculpture Center in Vermont. She has recently returned from Taiwan
where she participated in the 2012 Cheng Long Environmental Art Project
with the installation Invasive Species.